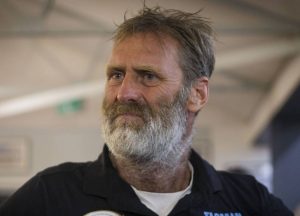 It took Scott Donaldson 9 years to plan the trip of a lifetime and less than 9 weeks to complete it. On July 2, 2018, after 61 days and 10 hours, Scott become the first solo kayaker to successfully kayak from Australia to New Zealand. The landing was all the sweeter after having had to abandon a previous attempt in 2014 due to a broken rudder, 84 days in and 80km from the Land of the Long White Cloud. Brutal. Having completed this epic journey, Scott is clear that it is not all rainbows.

A good day included 16 hours of paddling. A bad day was too rough to paddle, and on the worst days currents and wind would drive Scott backwards. The long hours were punctuated by visiting sharks, lightning storms and the odd bird. He battled some mighty storms in the notorious straight in his boat named Double Ditch II.

Scott was the tenth paddler to attempt the ditch and he reckons you don’t do things like this for fame or fortune. He was inspired by the likes of South Pole adventurers Roald Amundsen and Robert Falcon Scott as a kid, but now considers modern-day adventuring to be expensive and he reckons adventures should be motivated by intrinsic rewards.

In his youth Scott was a Commonwealth Games triathlete and he went on to become a swim coach, dabbling in multi-sport events like the Coast to Coast. He emptied his tank on the Tasman crossing and has hung up his competitive hat for the time being. He is now retired and now considers a good day is a cheeky paddle from Omaha to Whangaparaoa.

Scott co-wrote a book with Steve Kilgallon about his journey, called Relentless. We look forward to hearing more tales at this year’s event.